Rhinos and Crocs and Spoonbills, Oh My!

The museum hosts a magnificent collection of a variety of preserved animals from rhinoceroses to crocodiles to spoonbills – even a few ancient species to marvel. The dazzling array of animals boasts over 1,000 mummified birds, 500 mammals and 250 reptiles, as well as rare skeletons, skulls, skins and pelts. Don’t worry, most of these animals came to rest from natural causes and have been preserved to educate and amaze those who visit the museum.

Teaming up with Egypt’s Ministry of Agriculture and Ministry of Tourism and Antiquities, Ahmed Attia, founder and executive manager of NAV3D, has captured a 3D tour of the museum to make these wonders more accessible to a wider audience. Ahmed shared with us his experience capturing such a detailed space in 3D.

Q: What inspired the 3D capture of the Zoological Museum and Giza Zoo?

Most people in Egypt, including myself, didn’t know that there is a beautiful Zoological Museum in the legendary Giza Zoo. The initial idea was to capture the 3D tour for just the zoo, but after I reviewed the site, I convinced the zoo to also capture the Zoological Museum to encourage visitors to learn about the all of the different animals and creatures.

Q: What are the “must-sees” you want visitors to explore and why?

My favorite area that I tell everyone to see are the skeletons! There is a strange likeness between the animal skeletons and the human ones. Also, the birds on the top floor are an amazing collection. I had never known that we had so many different bird species in Egypt.

Q: What’s the one thing you want visitors to take away after exploring Zoological Museum-Giza Zoo?

The most important thing is for younger generations to see the Arabic naming of the different collections since most know only the English names of the animals and creatures. My daughters told me this, and they said this 3D tour helps them a lot in their science studies. 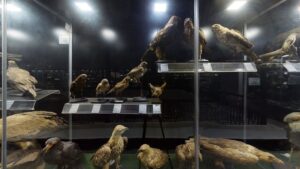 Q: Were there any challenges capturing the space, and if so, how did you overcome them?

There was a silver lining to the zoo being closed due to Covid-19.  It was easier to capture the museum and take various 360° panorama shots without having to work around visitors in the space. The team at the zoo was also very helpful.

The results of creating this 3D tour went beyond expectations. So far, more than 300,000 people have visited the museum remotely with the Matterport 3D tour!